Pop Queen DUA LIPA has officially released a new song, working with Silk City, entitled “Electricity”! Let’s just say that this song is ELECTRIC! Dua Lipa drops another BOP ahead of the release of her re-release album which is set to feature three new tracks!

Check out the music video for “Electricity” below!

One of the songs announced for this new album other than I believe “One Kiss” will be on the album is a collab with one of my ultimate bias groups in Kpop BLACK PINK.  the song is set to be titled “Kiss and Makeup”.  I think my heart skipped a beat when this was announced!!!

This is going to mean huge publicity for BLACK PINK globally!!!!! Moreover, I hope this means a future US and UK debut for the girls. especially with this release with DUA LIPA, it seems more and more likely that this will happen!!!!

I’ve been in my head thinking what the song would sound like with Dua’s killer vocals mixed with Rose’s and Jisoos then Jennie and Lisa coming in with their slaying rapping. I’m actually just getting hyped even now just thinking about the possibilities of what this song could sound like!! If you haven’t heard of Black Pink check out their newest single “Ddu Du Ddu Du” below! MY QUEENS ❤ ❤ ❤

these crossovers from Kpop to the UK and US music industry, it’s almost surreal for me, as I’ve been a fan of Kpop since 2010 and never expected collabs like these to be possible.

Dua Lipa has previously released chart-topping songs such as “One Kiss” with Calvin Harris which stayed at the number one spot for 8 consecutive weeks! The question is how will her next collab with Black Pink fair on the world charts????

Dua Lipa is set to release her deluxe re-issue album very soon. Which will feature all her previous hits including “New Rules” and IDGAF” and her newest releases “One Kiss” “Electricity” and the collab? It should be one amazing re-issue album! Here is an idea of the tracklist for the album as featured on Itunes music. 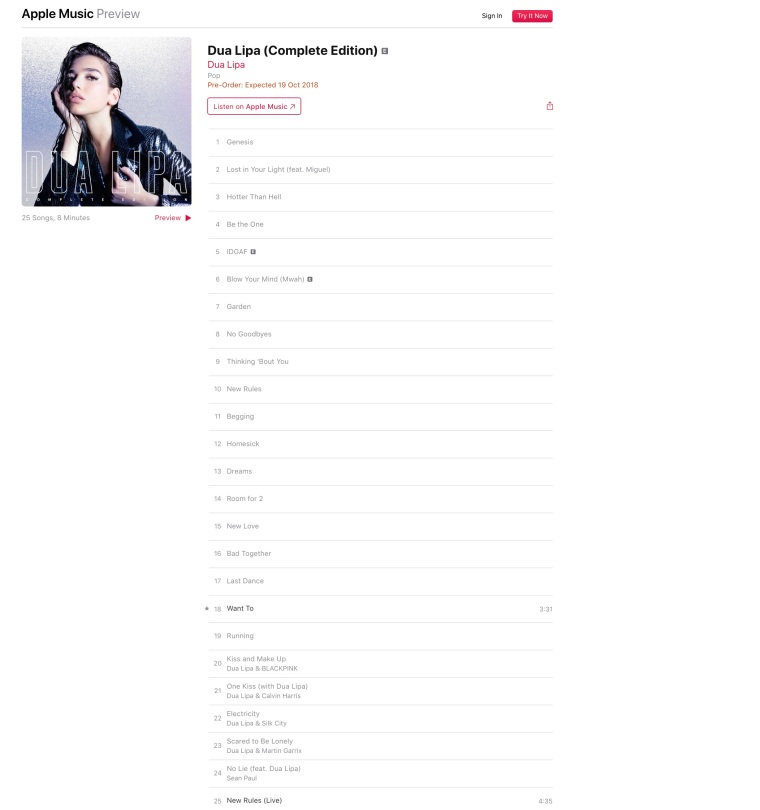 Woman of song cannot wait for this album to be released and will be purchasing a copy for review on release date. The 25 tracks on this album is an absolute spoil! She could have easily made just a mini EP but she had to go an add this to a re-issue album. All the more music the merrier! With how amazing Electricity is a song, we are ready for the Black Pink Collab and the rest of the new songs when the album drops in October!

Make sure you pre-order yourself a copy via the iTunes link below as we await the release of the album!!!!

Dua Lipa will always be loved here on Woman of Song, where women are celebrated in music!